This is a note on the arxiv by Matt Taddy from April 2015. It reads very clearly and has a simple point to make: language modelling techniques can be used in classification tasks by training a separate language model for each class; documents are assigned to the class of the model where the document has the highest likelihood (hence “inversion”). In our discussion, we assume a uniform prior over the classes.

Taddy considers the particular case of predicting the sentiment of Yelp reviews at different levels of granularity. Different approaches are considered:

Three separate classification tasks are considered, labelled “a”, “b” and “c” in the diagram below, representing two-, three- and five-class sentiment classification. 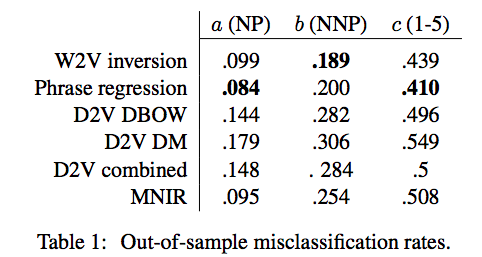 As illustrated in the following figure, only the word2vec inversion technique would do a decent job when the gravity of a misclassification is considered (so penalising less if, e.g. predicted star rating is off by only one star):