The representations obtained from paragraph vector (using cosine similarity) are compared to those obtained using:

In the case of the average of word embeddings, the word vectors were not normalised prior to taking the average (confirmed by correspondence).

Two corpora are considered, the arXiv and Wikipedia:

Only unigrams are used. The authors observed that bigrams did not improve the quality of the paragraph vectors. (p3)

Performance was measured against collections of triples, where each triple consisted of a test article, an article relevant to the test article, and an article less relevant to the test article. While not explicitly stated, it is reasonable to assume that the accuracy is then taken to be the rate at which similarity according to the model coincides with relevance, i.e. the rate at which the model says that the relevant article is more similar than the less relevant article to the test article. Different sets of triples were considered, the graph below shows performance of the different methods relative to a set of 172 Wikipedia triples that the authors built by hand (these remain unreleased at the time of writing). 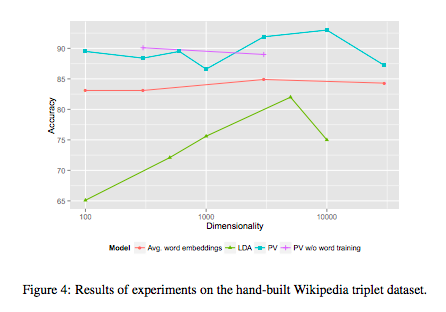 It is curious that, with the exception of the averaged word embeddings, the accuracy does not seem to saturate as the dimension increases for any of the methods. However, as each data point is the accuracy of a single training (confirmed by correspondence), this is likely nothing more than the variability inherent to each method. It might suggest, for example, that the paragraph vectors method has a tendency to get stuck in local minima. This instability in paragraph vector is not apparent, however, when tested on the triples that are automatically generated from Wikipedia (Figure 5). In this latter case, there are many more triples.

Performance on the arXiv is even more curious: accuracy decreases markedly as the dimension increases! 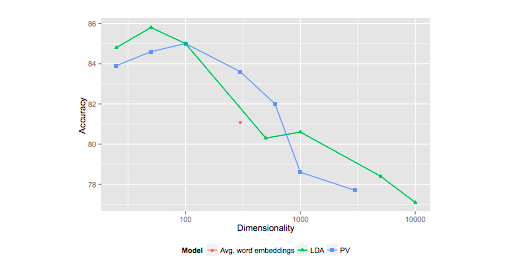 I believe that the gensim implementation provides only the unmodified version of PV-DBOW, not the one considered in this paper.

It is interesting that the paragraph vector is chosen so as to best predict the constituent words, i.e. it is inferred. This is a much better approach from the point of view of word sense disambiguation than obtaining the paragraph vector as a linear image of an average of the word vectors (NMF vs PCA, in their dimension reductions on bag of words, is another example of this difference).

Thanks to Andrew Dai and Adriaan Schakel for answering questions!

4 Replies to “Notes on Document Embedding with Paragraph Vectors”